From Mindless Trepidations to Mindful Thoughts

चिंता (Chinta) implies the trepidations of the mind. When the mind is engrossed in thoughts that lead to anxieties, fear, concern, and sleeplessness, it is due to Chinta. It is a detrimental quality that can severely impair the mind’s ability to observe, think, plan and act. A person engrossed in Chinta can confuse opportunity for a threat and mistake a threat for an opportunity. 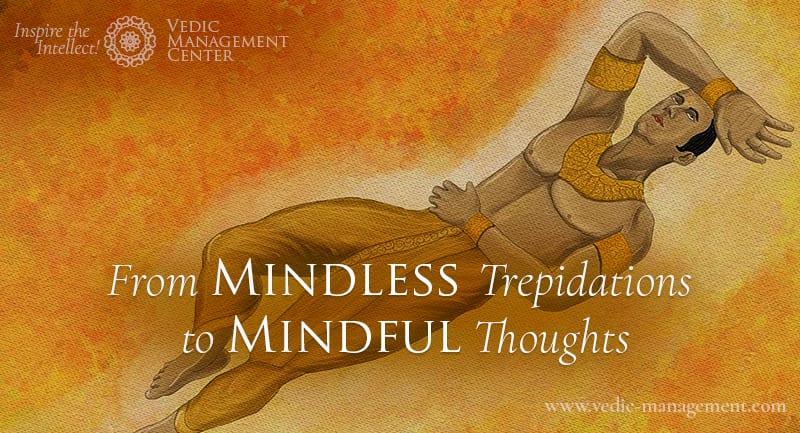 चिंता (Chinta) implies the trepidations of the mind. When the mind is engrossed in thoughts causing anxieties, fear, concern, and sleeplessness, it is due to Chinta. It is a detrimental quality that can severely impair the mind’s ability to observe, think, plan and act. A person engrossed in Chinta can confuse the opportunity for a threat and mistake a danger for a chance.

In his कारिका Karika, or commentary, on Mandukya Upanishad, Acharya Gaudapada states:

We are always independent of this body and mind. When our mind realizes this truth, it begins experiencing perpetual tranquil, everlasting effulgence, eternal bliss, persist unassailably and become completely fearless.

But this is easier said than done. Even the greatest of the sages in Vedic texts have failed to overcome the trepidations of their mind. To maintain the perfect mental equilibrium is not easy; this is truer when you are obsessing and expecting something.

Most people find this simple advice hard to follow. “How can one prepare for the success without worrying about it?” they ask. Krishna asks to “stop worrying” about the results; not to stop thinking. Thinking is crucial whereas worrying is optional.

Thoughts are of three kinds, सत्व Satva or Satvic, रजो Rajo or Rajas, and तमो Tamo or Tamas.

When the thoughts are without any trace of fear, that thought is Sattva or Sattvic.

When our thoughts are engrossed in fear with partial objectivity and focus, such thoughts are Rajo or Rajasic.

When our thoughts are entirely overwhelmed by fear and without any trace of hope, that is undoubtedly a Tamas or Tamasic thought.

Both Rajasic and Tamasic thoughts represent Chinta. When the mind is overwhelmed by Chinta, it also begins to reflect on our bodies.

It is, therefore, crucial for us to get our minds away from any traces of Chinta. And that is possible only through Chintan or mindful thinking or contemplation.

The mind has four essential functions Observe, Understand, Think and Act. In mind afflicted by Chinta ability to Understand and Think are often absent. It is indeed a travesty that humans, who pride in their ability to think, have often acted more out of impulses, only to make their life miserable. Even though the thought may not guarantee the expected outcome, without thoughts even a predicted result may not be nearly as good enough.

The mind has four essential functions Observe, Understand, Think and Act. In mind afflicted by Chinta ability to Understand and Think are often absent. It is indeed a travesty that humans, who pride in their ability to think, have often acted more out of impulses, making their lives more miserable. Even though the thought may not guarantee the expected outcome, without thoughts even a predicted result may not be nearly as good enough.

Most people often believe money as a solution to all their problems and, therefore, do everything in their purview to earn it. But when they do get it, they either find it “inadequate” or “too difficult to manage.”

People around the world, live a stressful life, traveling hours to make a living and to save enough to have a “comfortable future.” By the time the money is “enough,” their health begins to fail.

Most people often do things owing to societal, familial or friendly pressure – peer pressure. Just because their parents want them to do something – they tend to do it. Just because their friends are going – they too want to go. There is no thought in their decisions. They barely ask questions like “Do I need to do this?”, “Do I want it?”, “What if I take a different path?”, “Do I need to marry just because my friends are getting married?”, “Do we need children?”, “Do we need to put children to the same school where my colleagues send their kids?”

As a result, they all face similar problems. And even though they might discuss, it is more to vent their frustrations instead of finding a pragmatic solution to the problem at hand. It becomes gossip. Such gossips often aggravate the solution at hand leading to mindless comparison and jealousy.

True, humans are social animals. We do need help and assistance from fellow humans, but before we ask, is it not wise to think it through?

Thoughts play a crucial role. And it is not “thinking” when you are in the company of people or under the influence of mind-altering substances. Thoughts are better in solitude and best in meditation.

When you have a problem, take some time out. Instead of brooding and wailing about it, find a quiet place. Close your eyes and describe the issue for yourself. Let the description be without any trace of lust, anger, greed, infatuation, ego, and envy. Once you can explain the problem clearly, think of solutions. Then think about the limitation of that solution before bettering it. And once the clear solution is ready, balance your mind and get to task without worrying too much about results. Instead of worrying, think of bettering your approach and keep looking for a scope to improve your work and self. And never do a thing without giving it adequate thoughts. When you can think and work together – that is a process of Chintan-Manthan – constant churning of positive thoughts. From where you are always objective; seldom subjective.

Before I conclude here is an interesting story from my book RISHI TALES 2:

A Rishi wandered from village to village, and from town to town, followed by a lone disciple. The disciple, a restless young man, was in the habit of talking rashly and doing things which were not necessary. “My child, you must try to exercise some control over your speech and your actions,” the Rishi often reminded the disciple.

It was hot noon. The two travelers rested under a shed at the center of a bazaar. The opposite was a grocer’s shop. Now there was no customer in the shop. The shop-keeper was looking into his stock of various goods and handling them idly. While doing so, he accidentally dipped his finger into a jar of honey. To remove the honey, he wiped the finger against a pillar, leaving a patch of honey on the pillar.

“It was quite idle of him and also unnecessary for him to do so,” the sage told his disciple as they were about to leave the shed. Further, he added with a sign, “It may lead to an unforeseen consequence.”

“But, revered sage, what is the harm in such an innocent action, even if it served no purpose or thought?” asked the disciple.

The sage looked at the disciple for a moment. He realized that the young man had developed the impression that the Rishi saw cause for fear where there was none! He said, “My boy, let us then wait here for an hour and watch.”

They quietly sat under the shed, keeping a close eye on the shop. Soon a swarm of flies gathered on the patch of honey on the pillar. As the flies fought amongst themselves to gain access to the honey, they attracted the attention of a lizard which was on the wall. Slowly it came over to the pillar and gobbled up some flies with swift motions of its tongue.

The shop-keeper’s cat was lolling on a pillow behind its master. It had not found any occasion to be active for some time. Seeing the bright lizard, the cat sprang up at it and clawed it down to the ground. The lizard tried to escape, but the cat chased it onto the street.

Suddenly a smart little dog rushed at the cat and bit it. The cat gave out a piercing shriek. The shop-keeper hurried down to the street, picked up a large brick and threw it at the dog.

The dog was injured, and it barked furiously, attracting everybody’s attention to its plight.

The dog was the landlord’s pet. The landlord accompanied by this pet dog was taking a walk to a friend’s house. He had stopped before the shop to talk to a gentleman when the shop-keeper punished the dog.

In a few minutes, the landlord’s supporters rushed menacingly towards the shop. The shop-keeper shouted for help. His people too were not late in coming to his rescue.

In the meanwhile, an over-enthusiastic servant of the landlord set fire to the shop. The shop-keeper’s friends lost no time in arming themselves with sticks and other weapons and attacked the landlord’s supporters.

A riot ensued. Several thatches went up in flames. It was absolute chaos.

As flames and smoke blinded the sky, the Rishi and his disciple breathed freely for a while in the open. The disciple touched the Rishi’s feet and said, “I learned a great lesson today, my Guru.”

Udupi Mahesh Prabhu is a media, management & political consultant. He is a Founder-Director of Vedic Management Center and pens columns for Business Goa and Swiss Entreprenuers Magazine. A fellow of the Royal Asiatic Society of Great Britain & Ireland, London (UK) and member of the International Federation of Journalists(USA), he also holds a Masters in Business Administration with a specialization in Marketing. For more info visit www.indiamahesh.com

0 responses on "From Mindless Trepidations to Mindful Thoughts"

KOOTANEETI is an ancient Vedic art and science of advanced problem solving at an individual as well as institutional level. It is subtle, time-tested, counter-offensive tool that provides remarkable assistance in neutralizing your adversaries no matter how strong, potent or severe. In this interactive online course conducted by U. Mahesh Prabhu you will have an unique opportunity to learn this long lost art in way that is relevant to prevailing times and circumstances. APPLY NOW >>

an online course designed to empower individuals aspiring/retaining/succeeding in the position of leadership while understanding the clear and present practical challenges vis-a-vis time-tested timeless knowledge and wisdom on leadership propounded by Kautilya a.k.a. Chanakya. REGISTER NOW >> 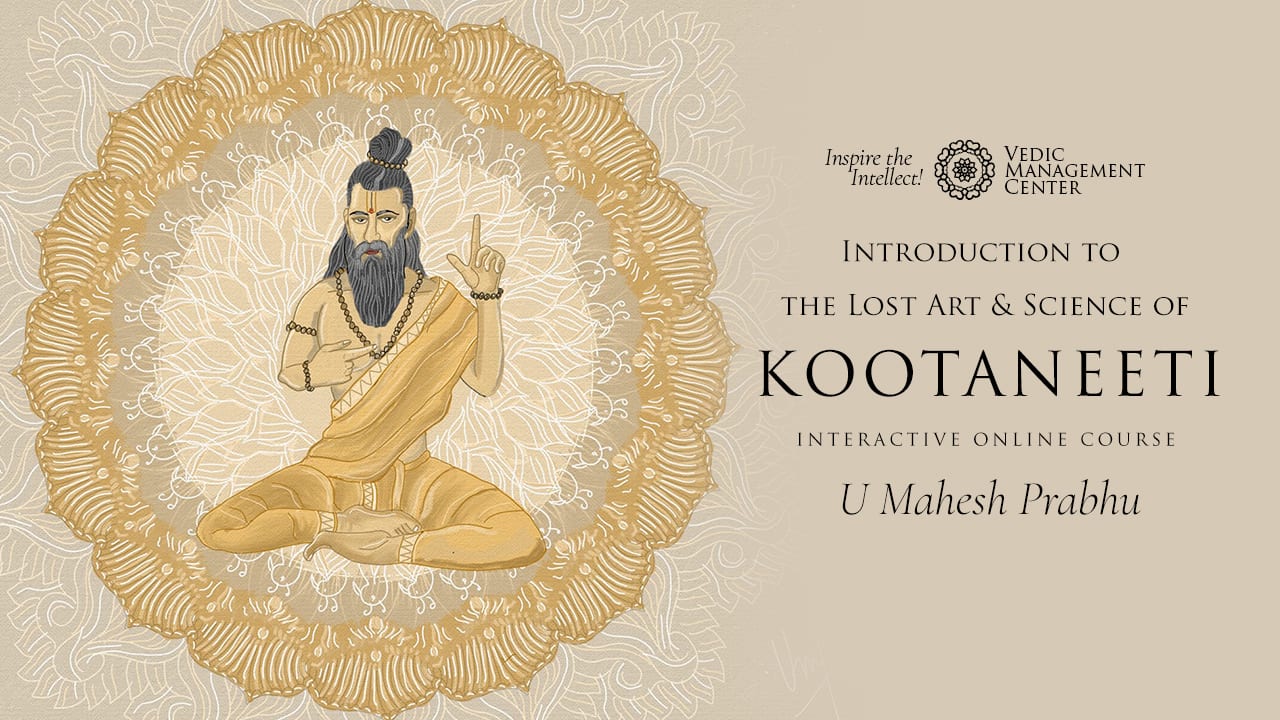